Let me introduce you our “Pueblo Magico” Tulum 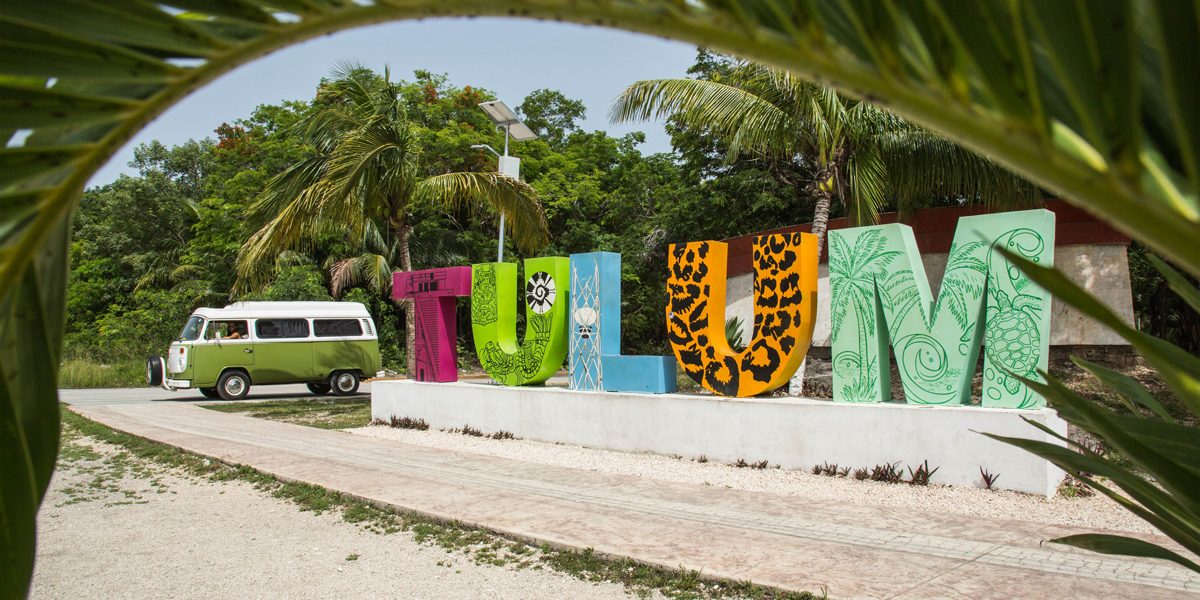 The Kombi experience offers you to visit Tulum and its surroundings in the best and most original way possible. On board one of our campervan you will be able to circulate, camp, sleep under a sky of miles stars, in complete freedom. The legendary mini bus volkswagen has always been the symbol of freedom! You have to live at least the adventure of traveling by bus vw, you will not be disappointed.

Tulum was founded in the 6th century during the Old Mayan Empire. By relying on the inscriptions found on the archaeological site of Tulum, the city was created in 564, her name was “ Zamà” which meant “dawn” because we can enjoy breathtaking sunrise  (Tulum being the modern name) .

The conqueror defeated  Mayas in 1544  by northeast of Yucatan. The city was abandoned until 1916 during the first excavations.Tulum is the only Mayan city built on the seashore, surrounded by a wall that protected it, hence its name Tulum, meaning « wall » or « fortification ».

It played the role of seaport to the Mayan world because of its strategic location , it served as a port and shopping center with other cities. The Mayan cities were temples and palaces where lived the characters of the nobility and the clergy surrounded by guards and servants, the people lived around in « palapas ».

You will not be able to sleep next to the remains of the ancient Mayas but there is an entrance to the site on the beach side near the Pancho Villa  where you can camp with your vw bus.

Tulum is located in an exceptional landscape between jungle and Caribbean Sea with long white sand beaches. You will be captivated by the ancient Mayan temples cliff side between jungle and turquoise sea. Tulum was occupied several times in the period of the Mayan Empire, it developed as we know it now, only from 12OO. 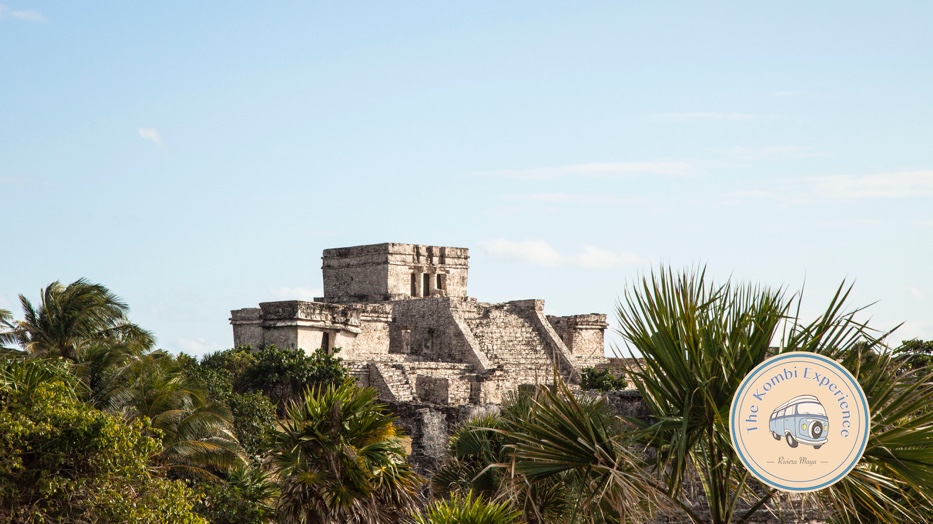 One of the main buildings of the archaeological site is called The “Temple of Frescoes”, it takes its name from its engravings and sculptures that decorate its facade, they represent supernatural beings who populated the underworld, the universe of the Deads of the Mayans. The angles of the roof take the form of mask of « Tzamná », the creator god with the old man’s face.

A small beach allowed boats to dock is located north of Castillo also called « Temple of the Descending God ». This temple retains the finest sculpture of the Descending God on its roof. You can appreciate the God upside down and legs in the air as if he was diving towards the sea or towards other universes. There remains a mural and some engravings that suggest intertwined serpents, as well as seated female figures and other gods receiving offerings. 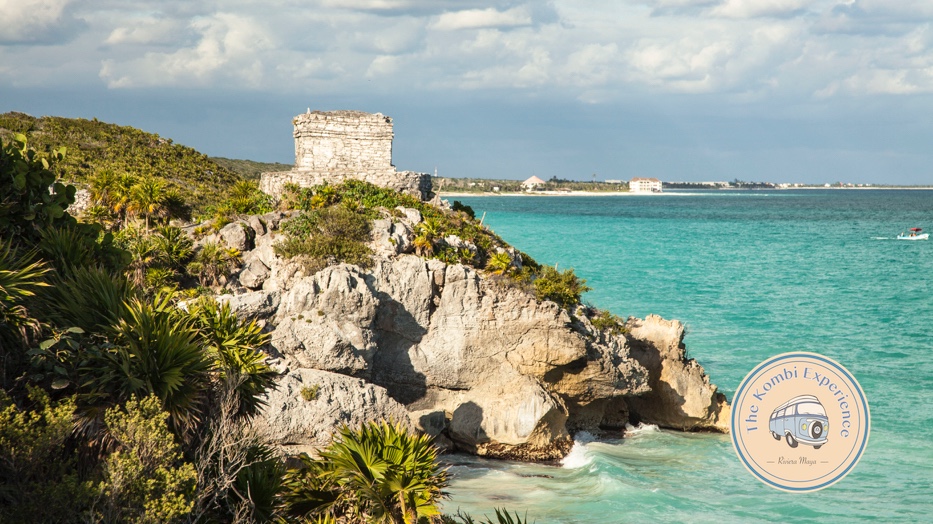 The temple of “the God of the Wind” was probably dedicated to Kukulkan in his representation of the god Ehecatl-Quetzalcoatl, the feathered serpent (Quetzalcoatl being a Nahuatl deity, brought after many conquests of the Aztecs on the Mayan territories). 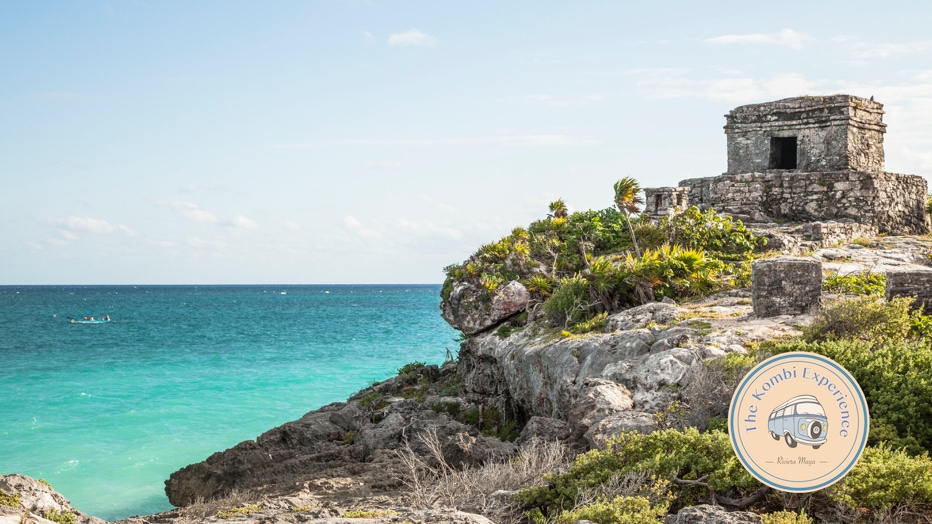 To appreciate this beautiful archaeological site as much as possible, we advise you to go there as soon as possible, after enjoying a beautiful sunrise. The site is much quieter in the morning and then you can take a sunbath on one of the most beautiful beaches in the world.

Enjoy the History of the Humanity and enjoy Yucatan with The Kombi Experience. Discover and book now our kombis: Azulita, Kiwi and Mandarina are waiting for you!

A Rad Little Kombi Volkswagen in Tulum, Mexico
May 1, 2018

Road tripping in Mexico with a Volkswagen camper
April 22, 2018

The Kombi Experience
4.8
Based on 17 reviews
powered by Facebook

Klaas Granini
2018-09-22T05:45:01+0000
It was a life time experience!!! The best roadtrip we ever did!! 11 days long we travelled with the kombi, we saw a lot... of the beautiful country in the best way there is. The owner is a really great guy, wen needed him he came immediately and he was there for us (thanks!!). The bus drove is to all the fantastic places without any trouble or breakdowns. We can recommend it to everybody. Klaas & Sabina p.s. we don 't know how to give 5 stars, but... 6 stars from our side.read more

Leandro Saidman
2017-08-29T19:20:36+0000
I cant wait to be again in tulum! Amazing Experience :) I had such a great time riding the kombi. We slept next to the... sea behind a lovely moon. Of course ill come back soon! Martin: thanks for everything and I highly recommend Diane´s Art!read more

Danielle Daiany
2017-08-29T19:07:06+0000
Traveling with the kombi was definitely one of the most amazing experiences I had. My husband surprised me and arranged... this in advance. When he came to pick me up with the kombi I had no idea what to expect. It was absolutely incredible. I got to explore Tulum and the many different beaches and exotic places it offers. We didn't have to rush and we're able to spontaneously decide what we want to do and where we want to spend each minute of our trip. I recommend this adventure to anyone visiting Tulum!read more

Jeremy Rose
2017-08-29T16:28:49+0000
I cant recommend this enough to my friends or anyone for that manner. I spent 3 nights with my 14 and 15 year old boys... traveling south of Tulum all the way down to the border of Belize and back. We explored cenotes and mayan ruins within an hour of Tulum. We camped out on beaches at night! It was an amazing experience that the three of us will never forget. If you are up for a little adventure in Mexico in the confines of a VW Kombi these are the guys to rent from. They were awesome, kind and helpful. They really shared excellent advice and ideas of where to travel to and sleep at night. Everyone should do this at some point of their lives if they love this region of Mexico as we do.read more

Samanta Katz
2017-08-29T02:24:19+0000
Obseeeessed with this company. Highly recommend ��� you can totally see how the project was born out of love for travel... and adventure. Like minded people with an amazing alternative to the tulum experience!read more

Melon Cha
2017-08-29T01:37:03+0000
With the Kombi Experience i had the best days traveling and enjoying the amazing places in Tulum! I totaly recommend to... try this kombis, they have all you need for travel, super confortable and easy to drive. Now i want to buy one for me!! Hahaha Thank you Martin and Dianne for your amability and atention.read more

Gaby Urfeig
2017-08-29T01:34:17+0000
We spent five wonderful days, at the riviera maya, the kombi was always our dream, and we never thought that it would... be possible as easy as this. thank you Martin and Dian, for this awesome expirience!!read more

Lindsay Quatrale
2017-05-15T17:37:55+0000
Martin and Diane are amazing! They have 2 Kombis- we took the blue original one for the week and experienced Tulum like... you couldn't imagine.... Just picture waking up to a sunrise on the beach from your van-BEAUTIFUL experience :)read more
Go to Top
Scan the code